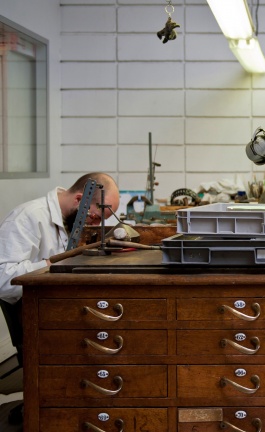 Inspired by lead editor Nickolas Felton’s tumblr, PhotoViz, recently released by Gestalten, showcases some of the best visual artists working in the intersection of photography and data visualization. Combining the visceral immediacy of photography with the cerebral narratives of infograhics, and depicting information as varied as invisible Wi-Fi networks, global trade, traffic and time through striking images, the book is a mesmerizing photo-journal of sense and sensibility that marries photojournalism with art.

Static No. 12, photography by Daniel Crooks, from PhotoViz © Gestalten 2016.

The contributing photographers use a wide range of both analogue and digital techniques—from panoramas and slit-scan photography to post-processing, collage, and metadata—to create beautiful, engaging images that compactly reveal patterns and connections that a simple photograph cannot. Long-exposures, for example, have been used for all kinds of projects such as mapping the flight paths of moths, aircraft and combat fire, creating monumental light sculptures and exposing automobile accident traces.

Certainly one of the most challenging tasks for any photographer is the depiction of movement and PhotoViz features several stellar projects such as Nir Arieli’s use of layering to create single-frame choreographies, JL Design & Korb’s use of post-processing and motion capture to render action into sculptural form and Noah Kalina’s long exposures documenting sexual intercourse as a literal, blurred union of two individuals.

Another notoriously difficult subject matter to visualize, the passage of time, is masterfully tackled among others by Richard Silver who sequentially re-assembles famous landmarks from photographs taken before, during and after sunset, while Fong Qi Wei graphically captures the rippling light through re-jigged photos of land-, city- and seascapes, and Bobby Neel Adams - who eschews digital manipulation tears - recombines pictures of close family members into one ageless portrait.

We see even more mundane subjects like traffic or trash can be presented in the most inspiring of ways, prime examples being Iepe Rubingh capturing traffic in a Berlin by spilling paint on the road, Mike Kelley who uses compositing to depict nearly a day’s worth of aircraft taking off from LAX in one stunning single-frame image and Alejandro Durán whose meticulously composed images of plastic waste being washed ashore in Mexico are both captivating and tragic, combining, like the rest of the book's images, a compactness of information with a sense of beauty.

Time is a Dimension, photography by Fong Qi Wei, from PhotoViz © Gestalten 2016.