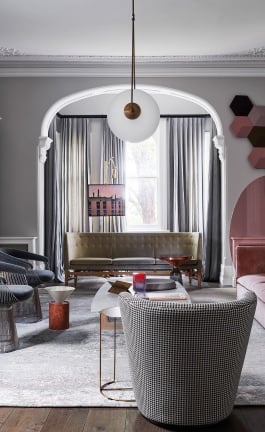 How can an artwork simultaneously represent and embody the space it occupies? This conceptual conundrum lies at the heart of New York-based artist Sarah Oppenheimer’s practice which explores how human beings and architecture interact. In her work, panels, windows, doors, and even walls become agents of spatial transformation, reconfiguring the space they inhabit, physically, perceptually and programmatically, as visitors manually interact with or move around them. Apertures and extensions, seamlessly integrated into the building fabric, uncannily modify the gallery spaces that the artist takes over, both highlighting and subverting the distinction between observing and being seen, progressing and being diverted, moving and being moved. “Architecture was an unexpected discovery”, Sarah says in a recent chat she had with Yatzer, “I stumbled upon the field at a moment when I was tangled in a cluster of critical questions regarding my own practice”. For Sarah, who has an M.F.A. in painting from Yale University, architecture is both a medium and a canvas. Focused on the relationship between architecture, movement and perception, her work is underpinned by a desire to reconcile the age-old conflict between experiencing and understanding space.

Sarah’s work often hinges on reshuffling, heightening or negating the boundaries between and within spaces, both physically and perceptually. In her 2012 work entitled D-33 at P.P.O.W. Gallery in New York for example, several partition walls had to be demolished and re-built in almost the same position in order to accommodate angled apertures and slightly shift the existing layout. Positioned in the corners of the rooms, the triangular and trapezoid incisions not only create visual and navigational shortcuts between the once separate rooms, but also produce complex perceptual illusions courtesy of the protruding glass planes whose tilted orientation reflect and extend the space. The same concept was further explored at Kunsthaus Baselland in Switzerland in 2014 where she reconfigured the gallery's interioe with her work 33-D—the digits in the titles of Sarah's work track different types of flow between the spaces.

Sarah’s interest in thresholds and transition spaces like doors, inspired the concept of the “switch”, a device that opens and closes, modulates the flow of light and people, binds and separates, and in the process transforms space and perception and even itself. Take for example S-281913, a work commissioned by the Perez Art Museum in Miami in 2016 which featured two massive glass boxes suspended mid-air, which visitors could manually rotate around a diagonal axis. Slowly flipping from a horizontal to a vertical orientation and back again, their spontaneously choreographed movement constantly re-oriented the space around new axes, and produced a visual relay between the overhead fluorescent lighting and a window-framed view of Biscayne Bay. The diagonal axis also blurred the strict division of the horizontal and vertical plane, a fundamental principle in the construction of architectural spaces. As Sarah explains, “my work aims to heighten the dissonance between the Euclidean coordinates of built space and our experience of it”.

The rotation of the two boxes at a 45-degree angle speaks of the technological ingenuity of Sarah’s recent work. The movement may seem effortless; however its simplicity actually belies a mechanical design of highly engineering complexity and razor-sharp precision. In fact, the “biased pivot”, which was also featured in S-337473 at the Wexner Center for the Arts in 2017 and S-334473 at MASS MoCA in 2019, is a unique, patented invention that Sarah developed in collaboration with Ohio State’s Department of Mechanical and Aerospace Engineering during a two-year residency at Wexner.

These projects also speak of Sarah’s interest in the unspoken relationship between museums and visitors. “Museum visitors possess an uncanny reluctance to touch the art”, Sarah says. “It is as if the aura of the work is maintained through its policed tactile boundary. By creating work that requires active navigation and physical contact, a certain social barrier is breached.” Her work raises questions regarding the role of the museum and its institutional protocols which she surreptitiously attempts to subvert by “finding the threshold that empowers a visitor to actively engage with their surroundings”. “What is the minimum social cue required to breach the prohibition against touch?” she asks. “Seeing a visitor move an artwork often invites others to do so”, and for the more perceptive, “fingerprints on a glazed surface imply someone has touched it before you”, while sometimes even the role of the museum guard can be turned on its head.

At Von Bartha gallery at S-Chanf in Switzerland in 2018, guards encouraged people visiting I-131311 to rotate a panel that causes two planes of a glass window to open and close via a helical screw embedded in the wall. The purposeful delay in the movement of the two planes, which never quite met, entangled visitors into a choreographed performance “that not only demarcates space but marks out and measures time, slowly, steadily, deliberately, again and again”, as Soyoung Yoon, Assistant Professor and Program Director of Art History & Visual Studies at The New School in New York City claims.

Sarah’s latest project N-01 in Kunstmuseum Thun in Switzerland, which she has been developing for the past two years, brings together all of the concepts and techniques featured in her recent work: “switches”, the manipulation of thresholds, the relay of movement, tactile engagement and hidden mechanical components, as well as the use of the institution’s architectural archive. The latter is part of the initial phase of a project which investigates when a field survey of the building is juxtaposed with archival documents, such as drawing sets, photographs of the building’s construction, minutes from meetings with contractors along with documentation from prior exhibitions. The case of the Kunstmuseum is exemplary: housed in an 18th century Neo-Renaissance edifice that was originally used as a grand hotel, “the building’s adaptive re-use”, Sarah tells us, “creates all sorts of material and programmatic anomalies between the architectural archive and the current conditions of the building”.

Taking over several gallery rooms, the project comprises a series of architectural instruments that visitors manipulate in order to modify the architecture of adjoining spaces—a pivoting door slides a wall, a rotating column opens a window, while a door handle pivots a wall in a darkened room to reveal large facade windows overlooking the Aare river. In the latter case, the daylight that gradually floods into the gallery rooms turns glass surfaces from transparent to reflective, which in turn opens unexpected sight lines and produces ricocheting reflections. This kind of chain reaction both disorients and elucidates the visitors’ spatial experience, constantly demanding the recalibration of their perception of the gallery rooms. Moreover, as walls retract and windows open, the mechanical devices that make these movements possible are periodically revealed, momentarily lifting the curtain on the artwork’s inner workings. This subtle act of revelation goes to the heart of Sarah’s practice which aims to upend “the conception of architecture as a solid and durable construction”, as Laurent Stalder architecture professor at ETH Zurich claims, “proposing instead a conception of architecture as a controlled and controllable environment”.