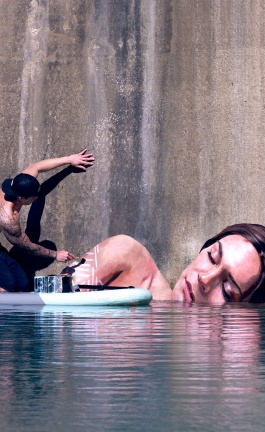 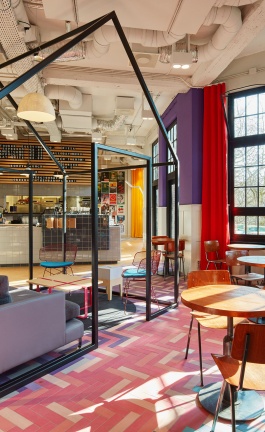 Greece and shipping. Shipping and Greece. It seems as if they are intrinsically interconnected in some way, shape or form. Sometimes, it's a logical connection but sometimes it's something entirely unexpected. One such example would be if a Greek shipping company started a luxury fashion label and a hard core, jaw dropping, incredible one at that

ΣΕΡΑΠΙΣ (Serapis), the brainchild of a four-member team which includes Manolis, Giorgos, Krini and Dimitra, officially came into being a year and a half ago, but it was, "In the works," as Giorgos tells Yatzer, for twice as long. Although all members have art or architecture backgrounds -with studies at the Fine Art School of Athens and Central Saint Martin's in London- starting a fashion label was a surprisingly easy choice. "Each of us has always had an 'obsession' with clothing and fabric, and we became interested in how products are distributed in the fashion industry as opposed to the art world," Giorgos says.

The "patterns" printed on the collection's silk garments and accessories are actually photographs taken aboard a cargo ship during a 2014-2015 trip from Poland to Saudi Arabia, through the Suez Canal. Serapis' photographer joined the mostly Filipino crew and captured the various moments of the ship’s daily life. The photos became a narrative of the journey and the crew's starring characters. A journey that is now continued through the images printed upon the high-end garments, as they become a part of the daily lives of their wearers.

Serapis' garments are straightforward in design and beautifully constructed. "We focus on traditional ship workers gear, but with a 'twist.' For instance, turning the neon orange safety vest into a silk dress or using the protective, reflective strips as a pattern," Giorgos tells Yatzer as he pulls out such pieces from the I Am You Hope collection such as: a long silk t-shirt dress emblazoned with the simple Serapis logo (which is written with Greek lettering because, "we are a Greek company"); cotton t-shirts featuring a silk panel along center-front printed with a vertical photograph of the voyage ship; and a covetable cashmere cape lined in silk with yet another photograph, are just some of the pieces among the collection.

It would be remiss to not mention Serapis' printed silk scarves which have become so popular that they fly off the shelves of Athens' Number 3 and Berlin's ULF Haines Men boutiques (among the other brick and mortars which carry the label). Interestingly, when worn, the patterns on the garments seem to shift, making them look like abstract graphic designs instead of photographs. To note, every item is limited edition, and each garment's production number written on the tag.

As with every element in the collection, much care has been given to the origins of the utilized fabrics. In fact, Serapis sources their cottons from Athens. "Only a few cotton fabric producers are left in Athens, but the ones that are here are amazing," Giorgos says. Then there is the silk, which comes from the best silk producers in the Northern Greek city of Soufli. Although Soufli boasts a rich silk history, it had been almost wiped out until a few years ago when a handful of home-grown designers took notice of the unique industry gem and decided to utilize it and, by doing so, revitalize it.

"Our lookbook was photographed on the same ship," Manolis shares as he pulls out the thick, arty tome and points out a few favorite images. "Some photos were taken in the exact spot as the photos that are printed on the photographed clothes," he says, indicating one such image. It's a unique concept. "The idea to start a fashion company grew organically," Giorgos tells Yatzer, as is the case with the brand's connection to the shipping industry. "Our families have been involved in the shipping industry," Manolis chimes in. "And Serapis exists somewhere between fashion and art."

As art, fashion and the shipping industry are all integral parts of the Serapis universe, it is unsurprising that the label participates in art shows, such as their exhibition and collaboration with CAN Gallery, PAN platform at Place Vendôme in Paris and their recent participation at Dio Horia Contemporary Art Platform in Mykonos, where they featured an installation/collection based on 4 videos Serapis shot in the port of Piraeus alongside photos printed on silk and 'framed' on copper sheets -the same copper sheets which are traditionally used to line the outer bottom part of ships so as to protect them from the water. That being said, "the main channel through which we present our work is fashion," Krini says as she demonstrates the perfect way to tie one of Serapis’ silk pareos into the ultimate sundress for after-beach drinks.

Serapis associates with high-end designers such as Comme des Garcons, Raf Simons and Vetements not only for aesthetic but business oriented reasons. "We look to them to see how they 'move,'" Giorgos shares. "We plan on producing two collections each year," Krini says because they want to be able to spend more time in research and produce more varied items. For the team, Serapis is a passion project that is well aware of the challenges it must face. "To begin a conceptual brand in Athens right now isn't an easy thing and it's certainly not something that was done on a whim," says Manolis. "We thought it through carefully and plan on going very far with it."