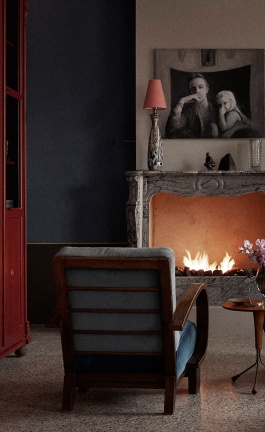 An Organic and Sustainable Escape at Wanås Restaurant Hotel in Sweden Located a few minutes’ walk from Milan’s docklands, the Darsena, behind a large, unassuming doorway on Via Scaldasole, SIX was conceived by entrepreneur Mauro Orlandelli as "a holistic container, where the result is superior to the sum of its parts". As lofty as this declaration sounds, the collective, which opened its doors on September 2017, more than lives up to its founder’s aspiration bringing together a design gallery, a green boutique and a bistro, as well an architecture studio and a design consultancy agency, in a multipurpose venue of timeless elegance.

The project was developed in collaboration with architects David Lopez Quincoces and Fanny Bauer Grung, whose studio, Quincoces-Dragò & Partners, was relocated next to the gallery, and art director Samuele Savio, who among other things coined the project’s name, six being “the smallest perfect number, a positive integer that is equal to the sum of its proper”.

Housed in a renovated 16th century monastery, the various spaces are centred around an old Milanese courtyard that welcomes visitors with an earthy colour palette, wide arches and balconies, and a plethora of climbing plants and overgrown planters that harmoniously fuse a classical with a colonial aesthetic. As the architects succinctly describe their approach, "we wanted everything, from the furniture to the plants, to look like they had been here forever".

The tropical vegetation continues inside, where the lush greenery growing out of reclaimed barrels, towers over visitors throughout the interiors, dominated by a large skylight at the entrance hall. The exotic accents are juxtaposed with exposed brick walls, painted a smoky grey, and the original floors of stone, decorative tiles and weathered parquet. Rounding up this sense of bohemian grandeur is the eclectic collection of both vintage and contemporary furniture, lighting and decorative objects on display. Ranging from collectors’ pieces to anonymous finds that cater to all budgets, the meticulously curated pieces of the Six Gallery include Vietnamese vases and Murano glassware showcased among nomadic rugs, mid-century Scandinavian and Italian designers like Alvar Alto and Gió Ponti mixed with vintage furniture of unknown origin, and avant-garde lighting fixtures by Ingo Maurer presented next to contemporary designs by Murano-based Yali.

The project also includes Sixième, Sergio Carnevale’s bistro and cocktail bar offering seasonal cuisine as well as exotic drinks like the Dulcis Infuso — a butter-infused bourbon, banana liqueur and vermouth cocktail served with a and dark chocolate wafer sprinkled with peanuts and hazelnuts — a private dining room that draws from the building’s monastic history, and Irene, garden architect and landscape designer Irene Cuzzaniti's studio where visitors can find unusual objects inspired by nature and culture which also doubles as a conceptual backdrop for photographic shoots and events.

It seems only fitting that Orlandelli’s background prior to founding his consultancy agency Forest Design in 2003 — whose offices were also relocate to SIX — is unrelated to the design vocations his ambitious project brings together, having instead worked for many years in the music industry. In this sense, SIX can best be described as a daring composition of pianissimo and fortissimo elements, creatively assembled into a harmonious symphony of design excellence.