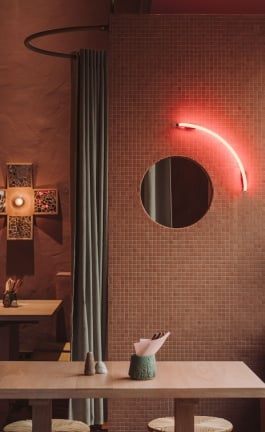 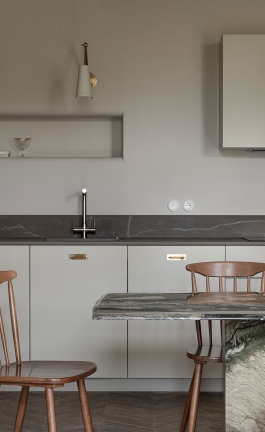 There’s been a lot of talk recently about America’s decline – its democratic institutions have been shaken, its economic power challenged and its pop culture dominance seems to be fading. In any debate such as this in which the complicated subject of the US is examined, it sometimes takes an outsider to put things into perspective as French sociologist and political theorist Alexis de Tocqueville demonstrated almost two centuries ago with his seminal book “Democracy in America”. Enter Dutch designer Job Smeets, whose debut exhibition with New York gallery R & Company, “The American Job”, offers an outsider’s reflection on a society in the midst of cultural upheaval. Like de Tocqueville, who travelled extensively across the country before writing his book, the exhibition was inspired by an unplanned, 15,000-mile road trip that Smeets embarked on in 2019 with his partner Rebecca Sharkey.

Three years in the making, the exhibition features sculptures and drawings that reflect some of the sights, symbols and experiences that he encountered on his trip, from cowboys, car garages and forgotten monuments, to Elvis Presley's Graceland. Seen through the designer’s signature aesthetic of whimsical maximalism and quirky irreverence, the instantly recognizable All-American icons on display evocatively capture their fading prominence and the elusiveness of the ‘American Dream’ as well as exemplify Studio Job’s reputation for exacting hand-craftsmanship. Marking the first major American exhibition of Smeets’ work since his retrospective at the MAD Museum, New York in 2016, The American Job runs through to January 2023.

The road trip is a uniquely American concept. Initially emerging as a form of recreation in the 1920s as the automobile was assuming a dominant role in American society, the popularity of road trips soared after World War II, the result of post-war prosperity, mass consumption, paid vacation leaves and the development of the new interstate highway system. As much a quest to discover the real America as to find one’s self, the road trip became the ultimate American adventure. It’s no wonder then that upon signing with the R & Company gallery, Smeets embarked on a cross-country journey, the grandest of this all-American activity, in the footsteps of Kerouac and Steinbeck. And what better way to do so than in a vintage 1977 Cadillac Eldorado that he fell in love with and bought on the spot in Long Island.

Starting on the East coast, Smeets and his partner made their way across the country, notwithstanding numerous breakdowns and diversions, passing through Tennessee, Oklahoma, Texas, where they almost became stranded, and New Mexico, before reaching California, where they ended up, by chance, in Elizabeth Taylor’s apartment in the Chateau Marmont in Los Angeles. Back at his studio in The Netherlands, Smeets embarked on the painstaking process of transmogrifying the highlights of his trip into a collection of sculptures that capture, as he says “the feeling of losing a culture that dominated the world”. This being Smeets, these aren’t run-of-the-mill sculptures, but rather opulently styled and exquisitely crafted artefacts inspired by the decorative arts of the 15th to 18th centuries, which double as cabinets, tables, or lighting, their unexpected functionality adding an additional layer of humour and complexity to his work.

It wasn’t just his notes, photographs and memorabilia that Smeets brought back from America to his studio in The Netherlands, he also shipped his vintage Cadillac Eldorado, which became the physical inspiration for the collection as well as the actual model for “Eldorado”, a sculptural replica at 1/5th scale that is suspended from the gallery ceiling. Crafted in polished, hand-painted bronze, hand-formed glass, and silver and gold leaf, Smeets has ingeniously managed to replicate the layer of dirt accumulated over the cross-country road trip, both as a token of the 15,000 miles travelled and as a reminder that once popular icons such as this are now considered museum pieces.

Undoubtedly, the collection’s showstopper is “Lady Liberty”, the artist’s contemporary interpretation of the Statue of Liberty which he has depicted in the throes of a storm. Produced in bronze, with her robe, hair, and torch billowing against strong winds, the windswept figure questions America’s erstwhile role as a beacon of freedom. Looking a bit closer, visitors will be delighted to discover a set of hidden drawers and doors that pay homage to Dali’s Venus de Milo, albeit in a much more complex fashion, with one compartment requiring the tilting of the entire statue to access.

Another surrealist figure that vies for visitors’ attention is Elvis Presley, or more precisely his iconic American Eagle Jumpsuit that Smeets came across during his visit to Graceland. Featuring a flamboyant cape and a humongous belt with eagle-hanging conchos, the bejewelled jumpsuit is the most expensive outfit that costume designer Bill Belew designed for Elvis in the 1970s. Depicted in action, sans Elvis, with light emanating from within, the incorporeal, ghostly figure is a poignant symbol of past glory. Displayed nearby is Elvis’ iconic Las Vegas hairstyle—think a black jet pompadour plus bushy sideburns—which Smeets has turned into a quirky sculptural light fitting, as he did with Priscilla Presley’s famous hairdo.

Additional pieces that fancifully yet poignantly recreate symbols of Americana and contemporary culture like cowboys and basketballers are complemented by a series of drawings and video footage of the artist’s travels, including snippets of conversations that capture the wider atmosphere of the experience, while a sculpture of a boy with his hand raised up holding a tray (“Prodigal Son”) is a nod to the artist’s first son who was conceived on this trip — no wonder the Great American road trip is billed as a life changing experience.