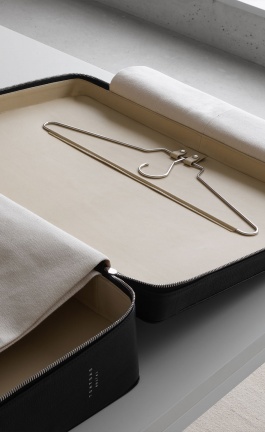 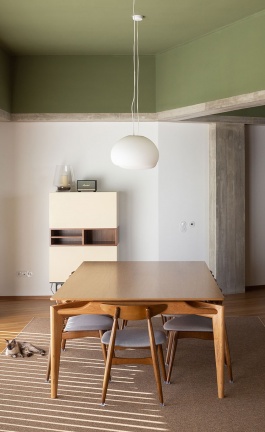 For French artist Xavier Veilhan, there is a fundamental difference between making public art and the more personal kind which tends to end up in private collections, museums or galleries; the former gives you the opportunity to change the environment it occupies but it also imposes certain constraints. “In so-called art spaces”, as the artist explains, “you can develop things that are more experimental while in a public space you have to go straight to the point and make something immediately understandable”. Veilhan’s latest public art project, Vårbergs Jättar (The Vårberg Giants), which was recently inaugurated in Vårberg, a leafy suburb southwest of Stockholm, languorously encapsulates the artist’s creative approach and artistic philosophy vis-à-vis the public realm.

The project, which Veilhan co-signs with scenographer and long-time collaborator Alexis Bertrand, is the winning entry in a competition organized by the city of Stockholm and constitutes the largest work of art in its history as well as its biggest artistic investment. Two years in the making, The Vårberg Giants comprise a 19-metre-long reclining male figure and a 3-metre in height female bust in blue concrete that straddle the line between figuration and abstraction. Monumental as they are in size, they are far from sombre edifices or playful follies, in fact Veilhan has designed them to be integral parts of their surroundings as they can be used as a bench, table, meeting place or playground.

The two imposing sculptures take their names from the location they occupy in Vårberg. The larger of the two, the Pelousen Giant, is a reclining, bearded figure whose daunting dimensions (19 metres long, 9 metres wide and 5 metres high) are juxtaposed by his lackadaisical posture of serene repose. As relaxed, albeit in a more contemplative manner, is the smaller Stråkparken Giant, a female figure whose arms rest on the ground as if she’s sitting at a table. Although only three metres in height, she appears larger as half of her body seems to be positioned underground. Veilhan has placed her on a circular plateau that was designed as a stage, while her male counterpart features a small platform on his chest, that both invites the public to use them as a way to encourage communal happenings and spur creativity.

Veilhan had both close friends and public figures pose for him, using 3D capture techniques to create digital portraits which he then used to create the final figures. While their design and scale were also informed by surrounding parkland, Veilhan and Bertrand also explored spaces like children’s playgrounds, mini-golf courses and other outdoor spaces and their design introduces new circulation areas with plateaus and cross-passages while also taking into account the existing paths, sled runs and trees.

Constructed in-situ from pre-fabricated concrete blocks in Veilhan’s frequently used faceted technique, the two Giants hover between abstraction and figuration depending on the point of view and the viewing distance. This ambiguity is quite intentional, and is meant to prod viewers to recalibrate their perception. “The objects I create are more a visual device than they are an end in themselves”, he explains, “it is the difference between looking at a pair of glasses and looking at something through a pair of glasses”. The sculptures’ ambiguous sensibility is further enhanced by their rock-like presence, inspired by Mount Rushmore, which blurs the line between natural and manmade, and their light blue colour which reflects the colour of the sky. Veilhan and Bertrand chose this colour in order for their work to stand out all-year round; against the snow in the winter, the green grass in springtime and the dry grass during the rest of the year.

The faceted, pixelated-like geometry also serves another, more practical purpose as some of the concrete blocks serve as benches, tables and even performance platforms as mentioned above. These are no typical public sculptures to be viewed from a distance. On the contrary, the two giant bodies are fully accessible to the public who are free to sit on, play with and congregate around them. “Art in the public space is not only a representation of something - a metaphor”, Veilhan poignantly explains, “but also just a physical thing, much more so than in museums or galleries”, as the people making use of the Vårberg Giants can definitely attest to.

Art in the public space is not only a representation of something - a metaphor - but also just a physical thing, much more so than in museums or galleries.